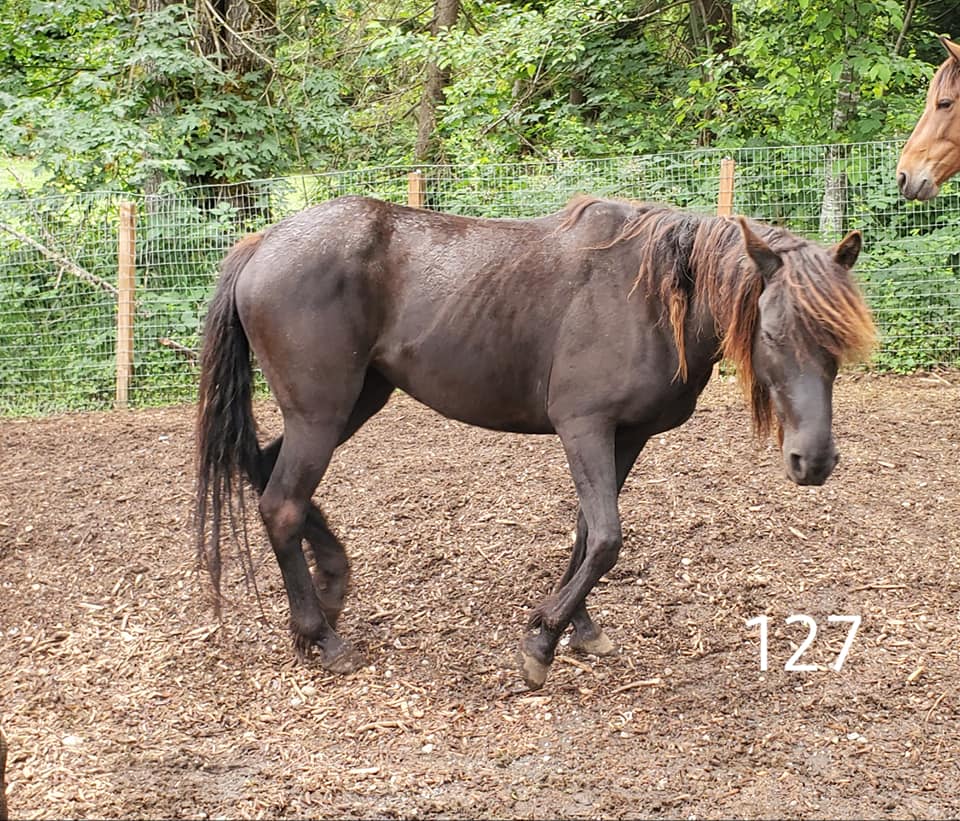 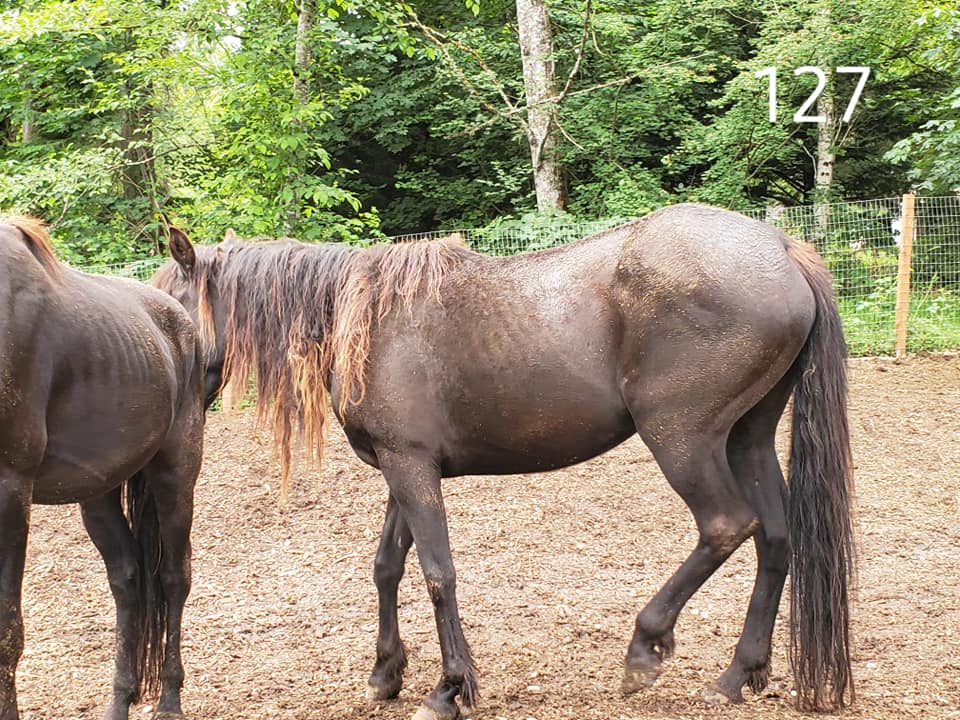 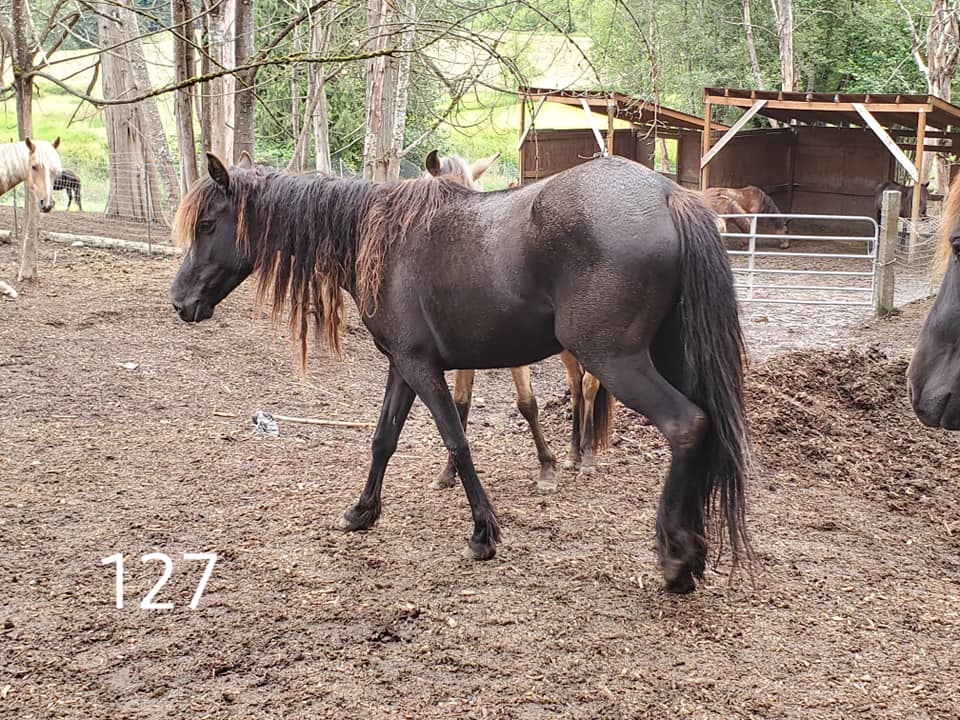 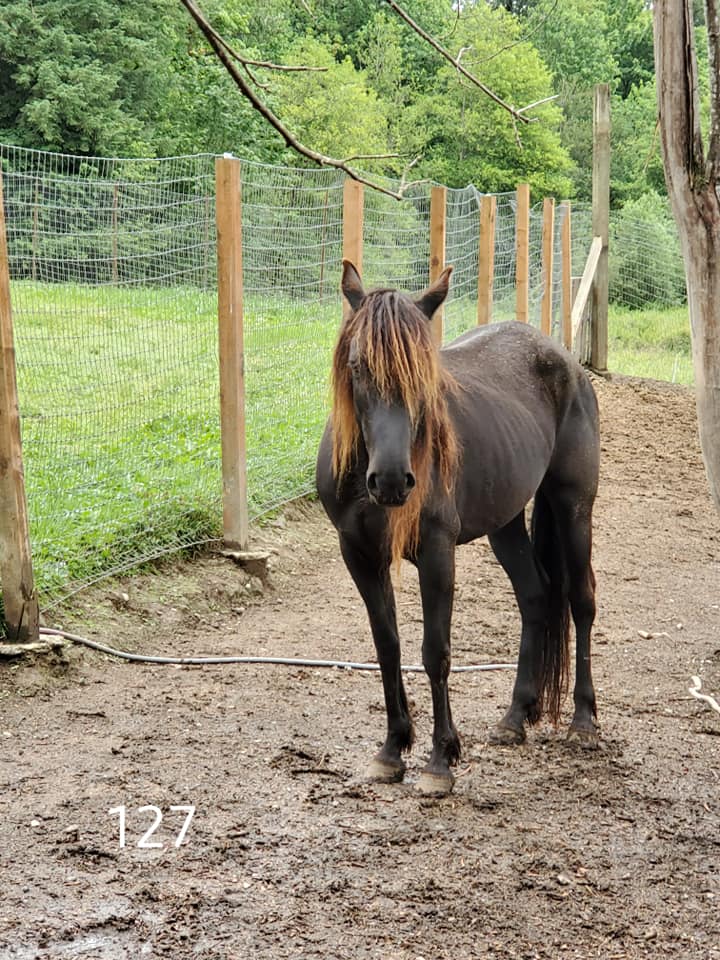 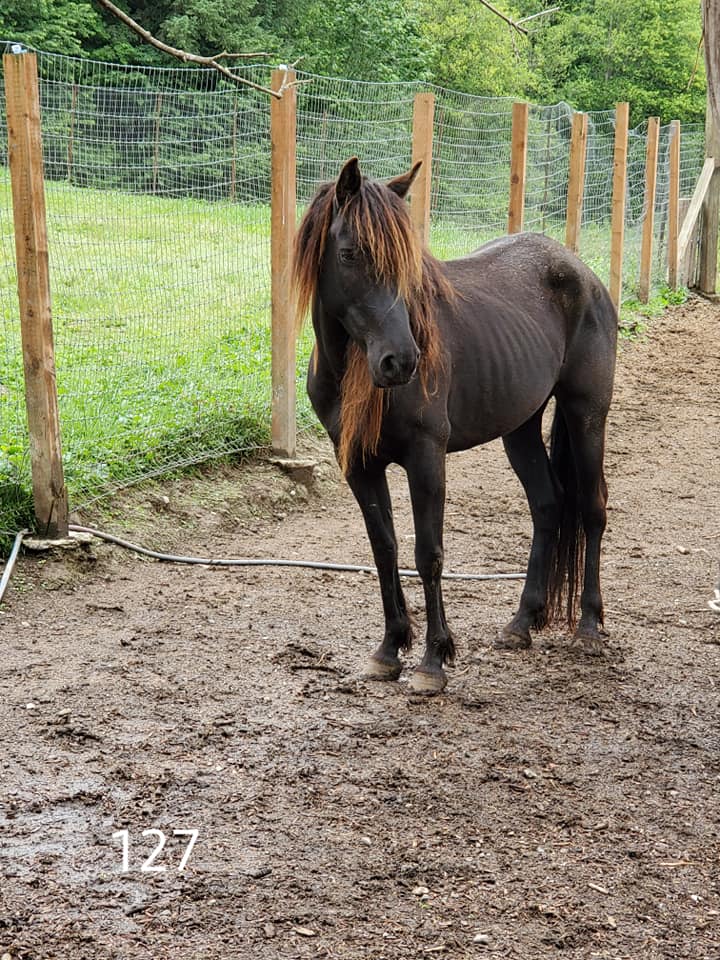 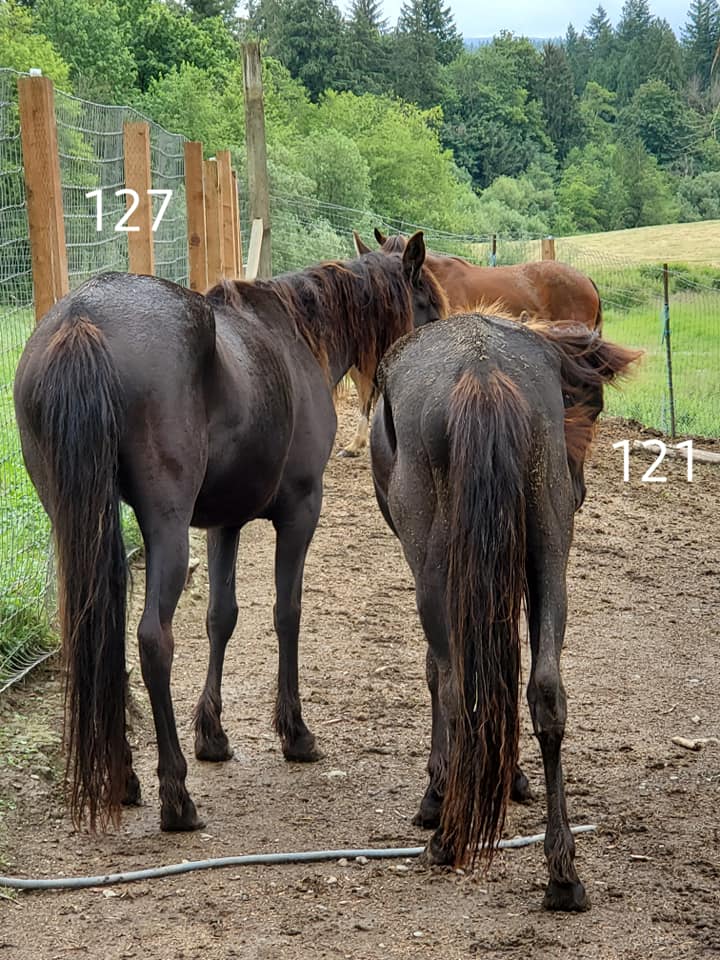 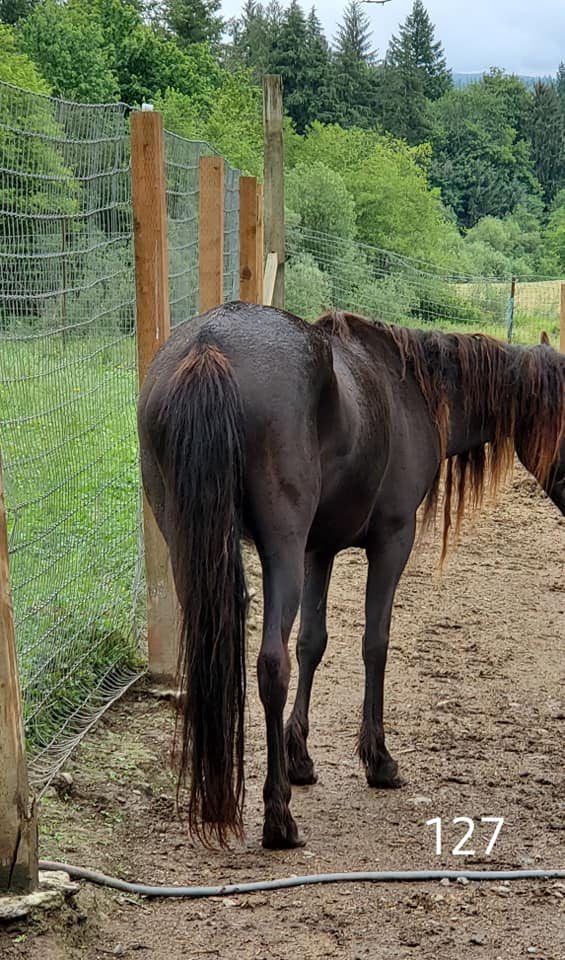 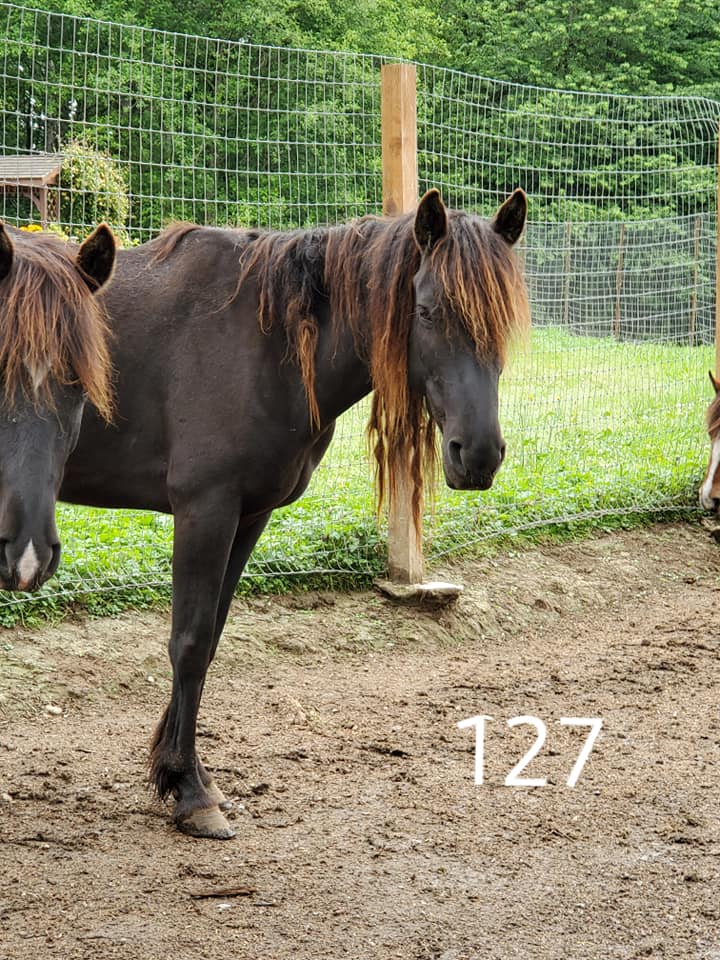 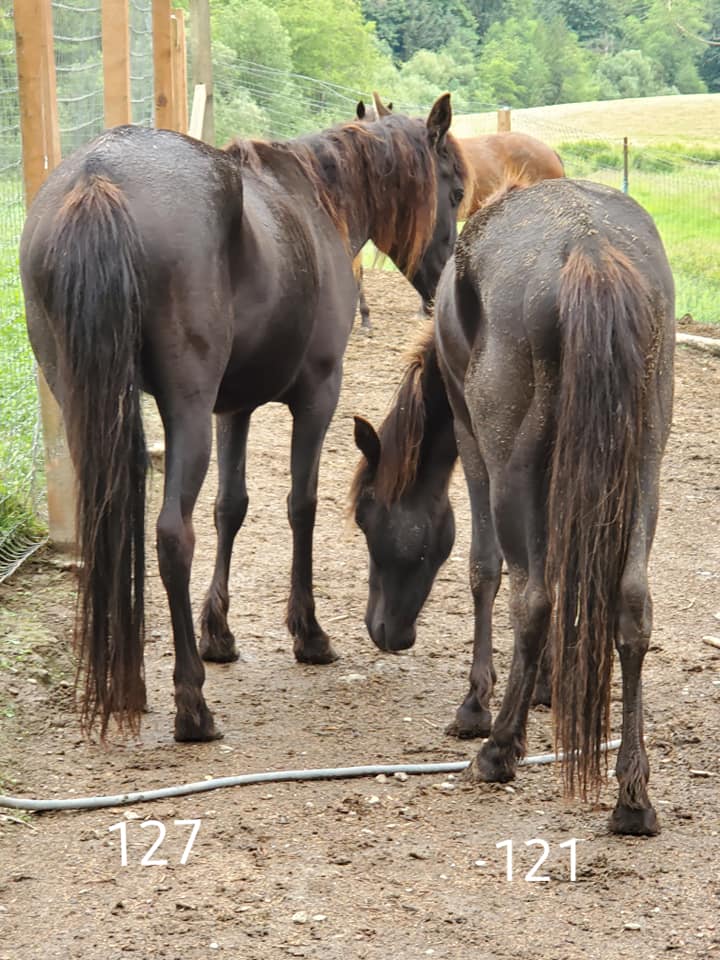 July 16, 2019– Worked for the 1st time today. We placed a small round pen at the corner of the pen. We slowly asked the horses to move away from pressure and walked behind them to get them closer and closer to the small round pen. In this middle field there are 7 horses, one of them being the mature stallion called “Rollo”. Careful not to upset of get them running we worked on asking them to move and blocking them from turning back to the bottom of the field.

I knew this would not be easy and my goal was not necessarily to get one of them in the pen. Rather my goal was to start to see how they reacted to pressure. If they looked my direction and stopped, I immediately took the pressure off. This “hooking on” is the first phase of haltering. The work we were doing in the outer pen was great and we started to see some good changes. After about 10 mins, #127, who had begun as a very skittish mare, started to quiet and really feel back to me what I was asking. At this point three other horses who had been working alongside her slipped to the other end of the pen. Alone, I was able to quietly walk behind #127 and correct any attempts to change direction. She walked quietly into the round pen and was very happy to see a pile of hay waiting for her.

I spent maybe 15 more minutes with her in the round pen. First standing quietly and introducing myself as a friend and not a threat. I then did the same thing I was doing in the bigger pen, and asked her quietly to move forward. When she offered to look my direction and “check me out,” I released pressure and let her turn in. If she got distracted or walked away, I asked her to move off again. I kept her moving in the same direction and if she tried to swap directions I corrected her until she lined up the way I had been asking.

I am VERY impressed with this mare. She is timid and shy but with a little quiet work today, she was showing lots of curiosity and willingness to join up. Once in the round pen she was quiet and not running or frantic. She is on the smaller size and without seeing her teeth I would guess her age to be around 3-4yrs old. She had stud colt #121 with her, who may be a long yearling or slightly older.